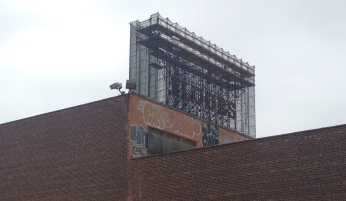 The Kentile Floors sign that looms over 9th Street between Second Avenue and the Gowanus Canal also looms large in the imagination of many Brooklyn residents.  It dominates the sweeping view from the F/G train tracks as they climb to the highest point in the New York City subway system.*  It is depicted on expensive  T-shirts sold online and at the Brooklyn Flea.  It has its own Facebook page and is featured in countless Flickr streams.

And now, it’s coming down.

In the intervening period, the Gowanus skyline lost its not-quite-so-iconic-but-still-loved Eagle Clothes sign when U-Haul, expanding its Third Avenue self-storage business, decided that an 80-foot tall advertisement for a defunct manufacturer of men’s suits*** was incompatible with two additional floors of lockers to hold stuff that Brooklynites can’t fit into their apartments.

Then, at the beginning of this month, Kentile Floors rumors started flying again.  More troubling was the fact that this time, the rumors were supported – by scaffolding.  On June 4, Gothamist reported that scaffolding was going up around the sign, and that a permit to remove it had been quietly applied for and granted back in April.****  On June 19, despite appeals by community residents and local politicians, the “K” and “E” came down.  Yesterday morning, when I ran along 9th Street on my way to the Red Hook track, all that remained of “Kentile” was the bottom half of the giant central “T.” I could barely make out two workers on a lift, doing something, slowly.  Removing an 8-story sign is painstaking work.

As the letters come down, they’ve been promised to the nonprofit Gowanus Alliance, which has vowed to safeguard them until they can be reinstalled . . . somewhere.  Somehow.  If they’re not damaged too badly in the removal process.

So that’s where things stand.  I will miss the sign.  Along with Coney Island’s Parachute Jump, the Williamsburg Savings Bank (now converted to luxury condos), and (of course) the Brooklyn Bridge, it was one of a handful of structures that, for me, defined Brooklyn’s skyline.

Inevitably, the spectacle of fashionable young Brooklynites decking themselve out in the logos of closed plants mired in asbestos litigation (or seeking to buy a letter or two to decorate their lofts*****) has inspired a bit of a backlash.  In a provocative piece in the New York TImes a couple of weeks ago, Ginia Bellafante writes:

That we are engineered toward the creation and consumption of easy narratives more than we are moved toward the analysis of complex realities is an argument to which modern politics and life give credence every day. Among urbanists in recent years, for instance, there has been a growing and rather emotional fascination with old corporate signs — mammoth emblems to industries whose output or methods of production are (or were) anathema to a prevailing value system that holds in relentless contempt anything processed, chemically supplemented, bought in a chain store or intended for ingestion more than 11 minutes after harvest.

She concludes by challenging the “nostalgists” (her term) to focus on improving the lives of real, current, working-class New Yorkers.

It’s an important challenge, and she’s absolutely right that nostalgia is not a political analysis, and certainly not a political program.  It can be a cheap and easy emotion.

And yet . . . nostalgia can also stir up deeper emotional attachments – the kind that, if you’re at all inclined in that direction, motivate and deepen activism.  For me, in addition to the coolness of its mid-century design, the Kentile Floors sign evokes memories of my grandfather, who had a small floor-covering business with his brother in Toledo and, later, Perrysburg, Ohio.  They may or may not have carried Kentile products (they were more into a competing line, Congoleum, manufactured in Kearny, New Jersey), but there’s something oddly satisfying in thinking about trucks? rail cars? loaded with sheets of flooring making their way from Gowanus to Midwestern warehouses to the kitchen floors of Toledoans.

From there, if you have a modicum of curiosity about such things, it’s just a hop, skip and a jump from nostalgia to an investigation of working-class history that raises discomfiting questions that just might – who knows – deepen our understanding of the present NYC economy.

The first thing that struck me when I started looking into Kentile’s history was how shockingly little information is available about the workers who made its products.  How many people lost their jobs when the plant closed in the late 1980s?  (It’s telling that I couldn’t even pin down the exact year of the closing.)  What happened to them?  What was it like to work there, and what were workers’ lives like?  How many were cut short by asbestos-related lung diseases?  I mostly came up empty.

Except . . . in the course of my on-line search, I did stumble on a comment from a former worker, “Hank Rich” (I have no idea if that is his real name), responding to a post about the Kentile Floors sign on the Fading Ad blog some years back.

I worked at the Kentile plant by the Gowanis Cannal in 1952, 53 and 54 as a piping/mechanical draftsman developing piping systems for manufacturing floor tile . Moved to Colorado in 55, but miss the smell of the old canal and the likes of Ramundo, Awan, Lupo, Jerry Johnson and the sound of the machinery stamping out the tiles, mostly asphalt, but we were working on cork tile at the time. Good days, but, sadly, gone forever.

The fact that Hank remembered the names of his (all male, it would seem) co-workers more than 50 years later speaks to the role work plays in our lives and the strength of the bonds we form on the job.  From now on, when I look at what’s left of the Kentile Floors sign (or, soon, at the empty space it used to occupy), I’ll be thinking of Hank, Ramundo, Awan, Lupo and Jerry – and of their children and grandchildren (literal and figurative, daughters and granddaughters as well as sons and grandsons) who deserve good jobs in this new Brooklyn landcape.

Nostalgia doesn’t provide answers, but to the extent it raises questions, that’s a start.

*Such is its appeal that riders have been known to glance up from their smartphones during those few precious minutes of connectivity between the Carroll Street and Fourth Avenue stations just to admire it.

**My honeymoon was in February 2013, and while I wouldn’t go so far as to say the rumors cast a pall over our two weeks in Trinidad and Tobago, I was very, very happy and relieved to find the sign still there when we returned.  Such is the ridiculous fondness it inspires.

***Eric says he used to own one of their suits.  If so (and I have no reason to doubt him), I wouldn’t be surprised if it’s still in our closet somewhere.

****In his excellent blog, The Weekly Nabe, my running friend Keith Williams recounts his trek to the Department of Buildings to research the permit.

*****Can’t locate a link, but that was the reaction of one Facebook poster on learning of the planned removal of the Kentile Floors sign. Not kidding.

This golden calf, a dollar sign between its horns, stood sentry at the (locked) gate of the “Factory Floor” complex in Sunset Park’s Industry City this morning. Had I stumbled upon the site of some obscure gentrification ritual? No celebrants were in evidence early on a Sunday – just a handful of workers sprucing up the far end of the courtyard.

Later, I learned – via a community news site, the “Home Reporter and Sunset News” – that the calf is in fact a pinata. Designed by artist Sebastian Errazuriz and titled (somewhat anachronistically) “XX Century Capital,” it was intended to be filled with $100 bills and then pounded with 99 wooden bats until money rained down on the celebrants. 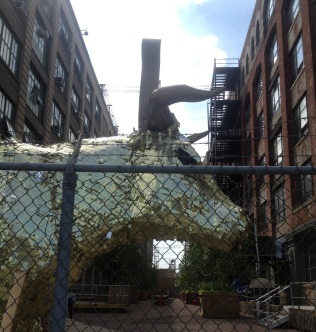