A few weeks ago, I posted about my experience running the New York City marathon – including a meltdown in the final miles that reduced me to walking as my left calf spasmed and my left foot did various, hard-to-describe weird things.

I mentioned at the time that one of the small army of marathonfoto.com photographers along the course captured my bewilderment and despair. I also vowed that I was going to buy that picture.

Extortionate marathonfoto.com prices notwithstanding, I did. And here it is. I have a long and well-documented history of sorry race pictures, but this is by far the sorriest.

Kids, this is what happens when you go out too fast. 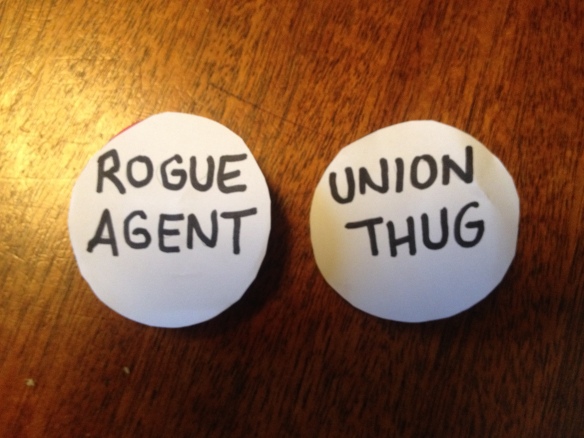 We didn’t actually wear these buttons.

“Remind me again why we’re going there?”

That was Eric’s question when I suggested we wear these buttons on our flight to Charleston, South Carolina.

It was a reasonable question. South Carolina is the state whose governor declared (in her State of the State address, no less) that unions “are not needed, not wanted and not welcome.” It’s the state whose U.S. Senators have described the National Labor Relations Board as, variously, an “out-of-control bureaucracy,” “third world tyranny” and “rogue agency” for its outrageous! ridiculous! shocking! interference with the God-given right of corporations to tear federal labor law into teeny tiny pieces, suitable for CEOs to scatter like confetti at bonus time.

If your reaction to all this is “huh?”, a bit of background. South Carolina’s business and political leaders reacted with predictable rage when the NLRB issued a complaint against the Boeing Corporation for shifting production of its 787 “Dreamliner” plane from Washington state to a new plant in North Charleston. The 2011 complaint alleged that Boeing’s move was illegal retaliation for (legal, federally-protected) strikes by the company’s unionized workforce in the Seattle area. In support of this absurd allegation (unprecedented! an attack on jobs and freedom and all we hold dear!), the rogue agency cited numerous public statements by Boeing executives that they were moving production to Charleston . . .  in retaliation for strikes by their unionized workforce in the Seattle area.

Thanks to Google maps, I already knew the drive from the airport to downtown Charleston would take us past “Dreamliner Drive.” And there it was. There, also, was the sprawling Boeing facility, still in operation despite the hysteria (job killers! business destroyers!) generated by the NLRB’s enforcement action. (As often happens, the company and the union reached a settlement, and the unfair labor practice charge was withdrawn.)

All in all, I had to agree with Eric that South Carolina was not the most likely destination for a trade unionist and an NLRB attorney.

So, why were we there? Well, why not? END_OF_DOCUMENT_TOKEN_TO_BE_REPLACED