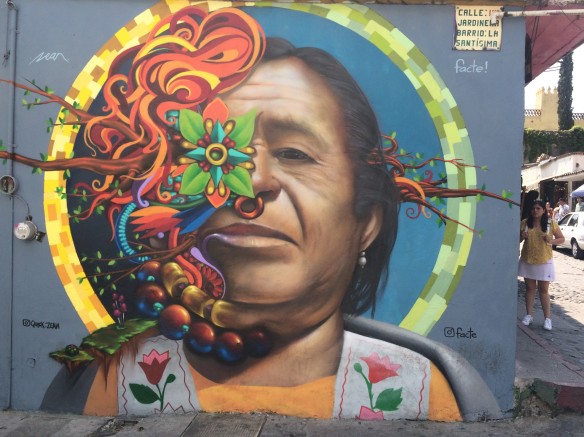 A short, scenic bus ride from Mexico City’s Taxqueña bus terminal, Tepoztlán is part traditional Mexican town, and part new age retreat.  It’s the kind of place where the central market offers both chapulines and gluten-free baked goods, where you can relax by chugging down micheladas or undergoing a hot stone massage, and where you can indulge in a pre-hispanic vegan menu or share giant skewers of grilled shrimp (distance from the coast be damned).

Tepoztlán’s primary claim to fame – aside from its beautiful natural setting and general charm – is Tepozteco, a peak topped with a small pyramid dedicated to Tepotezcatl, the god who brought pulque to humankind. His mother was the goddess of the maguey plant, and his father discovered fermentation, so it was only natural that Tepotezcatl would draw on this lineage to ferment maguey sap into a tart, viscuous drink. (I’ll have more to say about pulque later.)

Tepoztlán’s other claim to fame are the masa-based antojitos known as itacates. I’m not sure why itacates are so delicious. They’re just triangular pieces of griddled masa, on the thick side, that are split open and filled with your choice of guisados. That’s it. Not fundamentally different from a sope or gordita, and yet they taste ten times better. (The restaurateur Gabriela Cámara, who grew up in Tepoztlán, implies that the flavor may be due in part to the amount of lard used to make them.) You can find itacates at pretty much every stand in the Tepoztlán market, so Katie and I picked a place not entirely, but almost, at random – busy enough to indicate popularity, without being jam-packed, its line-up of salsas bright and interesting and full of promise.

I had mine filled with squash blossons, while Katie opted for longaniza sausage and potatoes. Both of us eventually settled on the startlingly purple salsa that turned out to be made from jamaica blossoms and habanero chiles (making my itacate blossom-on-blossom). That, plus a couple of glasses of fresh-squeezed orange juice, fortified us for the hike to come.

Climbing Tepozteco is no joke. It starts off as, almost literally, a walk in the park – there’s a carnival feel to the throngs of food and drink vendors clustered along both sides of the dirt track that begins after the town’s none-too-wide main street peters out – but once you start up the stone stairs, and even more so when the stairs give way to dirt and roots and jumbled rocks, it becomes both tricky and strenuous. I spent more time watching my footing than I did watching birds, if that tells you anything.

If they could do it, so could we. We weren’t about to let those pugs beat us.

Just before the peak, the trail is replaced by a steep metal stairway – essentially a ladder. We looked at the ladder, looked at one another, looked at the paleta vendor stationed there . . . and asked for one guayaba, one mango-chile. 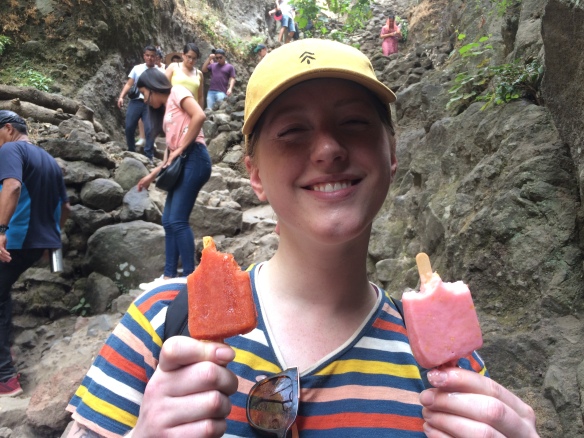 One of those was mine

Paletas in hand, our free hands clutching the railing, we climbed to (surprise!) yet another climb, and then to the sun-baked top of the mountain. There, a small fee buys admission to the archaeological site and the right to soak in the view of the valley below, including the impossibly tiny and distant town whose main street we’d walked to get here.

We spent a minute being impressed by how far we’d come, until we realized that these things go both ways. That miniature town so far below us? We needed to get back to it.

When we finally did (more quickly than the ascent to the top, but with more near-stumbles and also more grumbling), it was time to celebrate with some pulque. Tepoztlán is where I had my first introduction to the drink, on last year’s trip. The straight stuff is challengingly tart and funky, but “curados” soften the taste with various fruits and vegetables (celery is popular, guayaba my personal favorite). We found a spot on a side street, settled in, and then discovered that the only flavor was “red fruit,” which tasted like slightly-thinned strawberry jam.

My advice: stick with guayaba, or maybe piña.

The start (or end) of the road to Tepozteco

My other advice: if you go to Tepoztlán on a weekend (especially the last day of a three-day holiday weekend, as we did), don’t take your bus home for granted. Buses are frequent and cheap and comfortable, but at 5 pm on a weekend they will also be crowded. Spoiled by the ease of the morning’s trip, we strolled back to the station – located roughly a mile from the center of town – with no particular sense of urgency. When we got there, we found a wrap-around line of weekenders and day-trippers already waiting, and only by a stroke of luck were we able to snag the last two seats on the bus after the next bus.

We were sore, we were tired, and we were sweaty, but we were also very happy to have spent the day in Tepoztlán.

A note:
Back in January, when I committed to profiling 50 favorite places over the course of 2020, who would have thought that we’d soon be spiraling into a global pandemic, with travel out of the question and restaurants and other destinations closed indefinitely? Nonetheless, I’m going to stick with this project for as long as I can. A few pieces are already in the hopper, and there are always old photos to evoke memories of past travels around Brooklyn, NYC and the world.