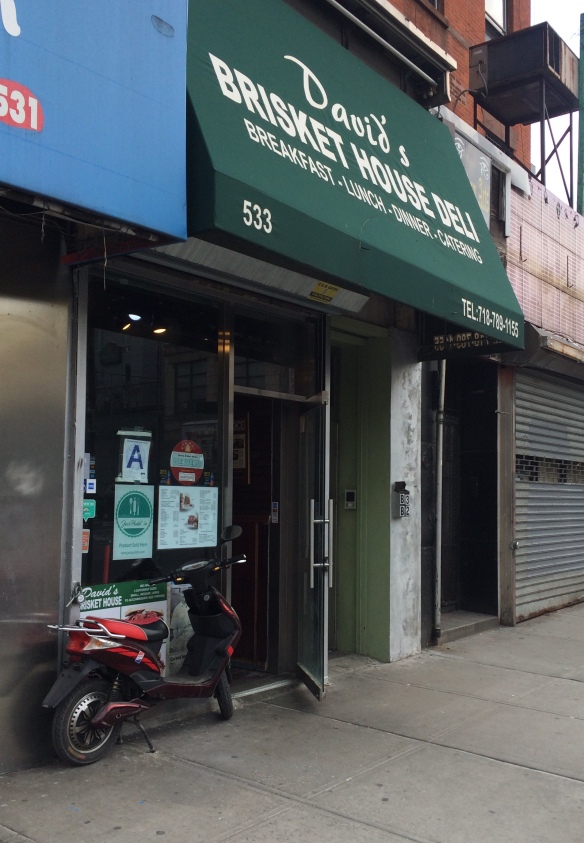 Yes, this is it: the famous, only-in-Brooklyn purveyor of Jewish deli that’s run by Yemeni Muslims and patronized mainly by African- and West Indian-Americans.

I stopped in for the first time a few weeks ago, and again yesterday. The location, near the A train, makes for a convenient refueling stop after birding trips to Jamaica Bay and the eastern-most reaches of Brooklyn. The verdict?  The halal pastrami is excellent, and the un-pastrami-ed brisket is excellent, too, succulent and flavorful.

Don’t come here expecting a Katz’s-style show. There are no gruff countermen carving your meat to order – but no interminable lines of tourists, either. David’s meats are sliced by the batch, from frequently-replenished, briskets, then piled in metal steamer trays to await your sandwich order. If the flavor suffers from that treatment, I didn’t notice. (I did notice – sadly – the bread.  It’s on the dry side, and innoculously-crusted, like all deli bread in NYC, which stubbornly refuses to adopt Detroit-style double-baked rye despite its vast superiority.)

David’s does mustard right, though, with Gulden’s Spicy Brown Mustard standard. (Gulden’s is one of two acceptable deli sandwich brands, the other being Detroit-based Red Pelican. Sorry, there are no others.)

In a civilized departure from deli tradition, you can choose the size of your sandwich. A small makes for a normal lunch. A medium is over-stuffed, and a large . . . well, I have yet to try a large.