The post-finish scene on Coney Island

Here’s an idea: let’s see what happens when someone trains hard all winter for a spring marathon, runs said marathon, then takes the next month off (logging only easy, stop-and-start birdwatching miles, mostly in quarter mile increments, with a longest steady run of, oh, let’s say 4 miles, and no speedwork) before racing a half marathon.

World of pain, or demonstration of the lasting aerobic benefits of marathon training?

I didn’t set out to conduct an experiment last Saturday – the Brooklyn Half is one of my favorite races, and I just wanted to run the damn thing – but the circumstances more or less created one. First there was Boston, of course, followed by a week of no running that carried me to the build-up of spring migration, with warblers and tanagers competing for my attention, and besides, I’m old and need more recovery time than I used to, right? By the time I started to think about training again, the Brooklyn Half was only a week away – too late for mitochondrial adaptations now.

And so I said “screw it” and went to Floyd Bennett Field to try to find red knots.

I’ve written before how odd it is to get up before dawn to get to a race in my own backyard – but with a 7 am race start and a 6:10 am bag drop deadline, that’s the deal, and I’m reconciled to it. (About that bag drop . . . honestly, New York Road Runners: every year you discourage us from checking bags, but do you really want to send more than 20,000 people in running clothes soaked through with various bodily fluids onto subway trains for the long ride back from Coney Island? Think about it, and spare us the guilt trip.)

I awoke before the alarm (always an early riser, my birding habit has turned me into an even earlier one), had my coffee and toast, and was on a CitiBike pedaling toward Grand Army Plaza by 5:40.

Race goals? “Just have fun,” I told myself, but my self fully recognized how lame that was. Once upon a time, in my running naivete, I thought statements like this were reasonable. Just relax, run as the spirit moves you, and soak it all in. What could be wrong with that?

In a 13.1 mile race, the answer is: a lot. Running as the spirit moves you (which is really running as the adrenaline moves you) in the early miles pretty much ensures that the spirit will be screaming “you idiot” at you by the 10 kilometer mark, and that you’ll be walking after 10 miles. Even though I’m not the best at sticking to my race plan, twenty years of running have at least taught me that it’s important to have one.

Okey doke, then. Let’s shoot for 1:54:00, the magic number that would qualify me for a guaranteed entry into next year’s New York City Marathon or – more saliently, since I’m done with marathoning, remember? – for next year’s Brooklyn Half. Not having to set an alarm to remember to register online for a race that, this year, sold out in less than 30 minutes is a nice perk. And the required pace – roughly 8:40 per mile – was what I’d done many of my marathon workouts at back in, er, March.

I figured I’d start out around 8:30-8:40 for the complicated series of out and backs and turns and loops that take runners around and through Prospect Park, then either sustain that pace or pick it up slightly on the long, flat straightaway that is Ocean Parkway.

That was the well-thought-out plan I came up with between Sixth Avenue and Prospect Park West on race day morning.

This was, the announcers reminded us more than once, the largest half marathon in the United States, with more than 27,000 entrants.

And every one of those entrants was standing on line to use the port-a-johns in the starting corrals. The lines snaked through the corrals, blocking all other movement. It was hard to tell how many lines there were, or where one started and the other ended – we were all on line, in a sense, inching forward across an unknowable distance toward an unknown goal.

As I stood on line, I listened to people around me fret about the weather. It had started to sprinkle, and this seemed to concern some of the runners. They couldn’t believe it was raining – rain wasn’t in the forecast at all – this was so unexpected, and so concerning – look, there’s a patch of blue over there, with luck the sun will come out in time for the start.

You object to a light, cooling shower? You want SUN!?! Do me a favor, just shut up.

Fuming now, I was on line when the corrals were collapsed and runners pressed more closely together. I was still on line when the national anthem was sung (beautifully, I should add).  By the time I left the line and began insinuating my way through the crowd toward other “D” corral runners – we were all pressed tightly together now, letters of the alphabet intermingled – the announcer was giving us our final race instructions.

And, of course, the rain had stopped and the sun was peeking through the clouds.

I ran the first mile, down Washington and then back up Flatbush, in 8:26 – a little faster than my plan. It felt ridiculously easy, of course, and the next mile (around Grand Army Plaza, then back down the other side of Flatbush, calling out to friends and teammates along the way) felt even easier. I skipped the first two water stops, and then regretted skipping them as the sun – damn those idiots in the corral, I sure hope they’re happy now – rose and intensified. From that point on, I was careful to grab Gatorade and water at every opportunity.

The 5K mark is shortly after the turn from Ocean Avenue onto Parkside, a stretch that I remember being a bottleneck in the past. Not so this year. I kept right on trotting along (8:21, 8:16), passing 5K in 25:54.

Runners enter the park itself at roughly 3.5 miles. I slowed a bit for the next two rolling-to-uphill miles – because of the terrain, sure, but also because of that goddamn sun, which was just on the verge of becoming what might be characterized as “blazing.” Oh, the bitterness that gripped my soul as I cursed those idiots back at the start. At least the park has some shade (albeit less than one might think). The last 6.1 miles of the race have none.

My second 5K, which took me to the beginning of the big downhill on the west side of the park, was 26:25 – right at the faster end of my target range.

The long downhill out of the park runs itself, the slight uphill to get onto Ocean Parkway wasn’t as bad as I remembered (though the uphill that follows, as Ocean Parkway emerges from the belly of the Prospect Expressway, always takes me by surprise), and . . . wow, what’s this beautiful, smooth asphalt surface we’re running on? Where are the lurking cracks, the stealth pot holes? With its brand spanking new pavement, Ocean Parkway felt like a running track. And to top it all off, the sky had clouded over and gifted us with a cooling breeze. Around Lawrence Avenue, I heard some of our famous Brooklyn parrots squawking; I’m pretty sure they were urging me on, along with the Brooklyn crowds and their creative signs (“The G train wishes it could run so fast”; “Run like there’s impeachment at the finish”).

All of this is reflected in my next 5K split of 25:21 (just over 8:10 pace). Despite starting out a bit faster than planned, I was picking it up, just as I’d hoped I would.

Then we reached Avenue N, and WHAM – the new pavement abruptly stopped, and we were back to running on rutted concrete. Then another WHAM – the runner in front of me collided with an Orthodox man whose urgent Sabbath business required him to cross the street, race or no race. The man brushed himself off, shook his head and muttered something; the shaken runner paused; and I just managed to avoid contributing to a bigger pile-up.

I was tired by this point, but not fatally tired. I ticked off the alphabetical avenues and ran through my usual “if/what” calculations – if I slow to X pace for the rest of the race, what will my finish time be? – not out of despair, as at Boston, but out of habit. Around Avenue U, I realized that I could slow to 10 minute miles and still finish under my 1:54:00 goal.

The fact that I knew this meant I didn’t have to. Instead, I just kept plugging along. My fourth and final 5K split was 25:26: nice and even. 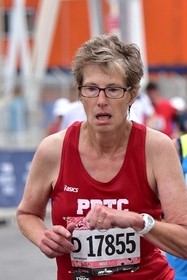 Less than three quarters of a mile to go! “Three times around the track,” I told myself, and my self basically told me to fuck off. The authoritative “800 meters to go” sign on Surf Avenue was a bit more persuasive, and I picked it up as best I could (damn that ramp to the boardwalk) before launching into what seemed at the time like a mighty finishing sprint, regardless of what my lying watch says.

Never mind the race photos that show me dazed and grimacing, with a bad case of ugly face (and not, I should add, “ugly” as in “terrifyingly fierce” . . . just ugly). The important thing was my 1:48:41 finish. It was, I realized later, my fastest Brooklyn Half in a decade. Not my fastest half – I’ve always run better on Staten Island in the fall, because I always run better in the fall, period – but close enough. I’ll take it.

And here, for the record, is my good race photo, the boring kind that everyone posts. Hugs and kisses to the anonymous photographer who actually captured me with both feet off the ground!

The bottom line: while I don’t necessarily recommend running a half marathon a month after a full, on no additional training, the experiment worked out reasonably well for me – this time.

9 thoughts on “Race report: my 2017 Brooklyn Half experiment”

Leave a Reply to Susan at FindingNYC Cancel reply