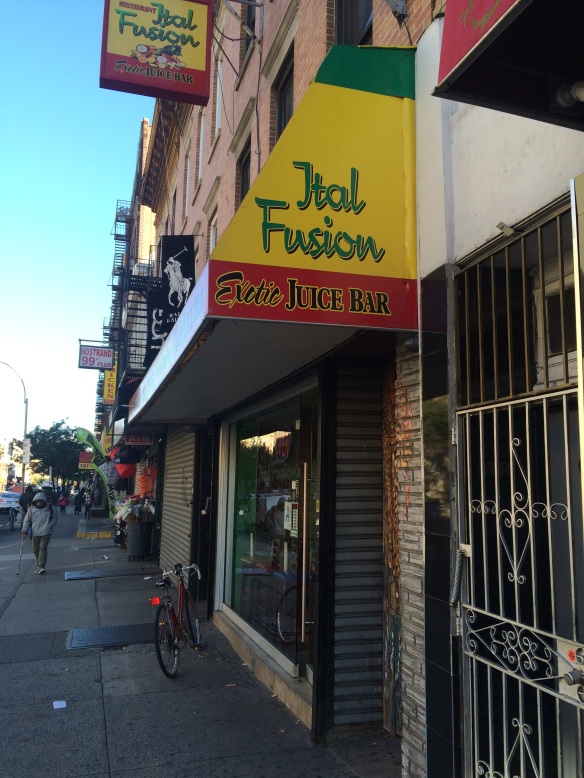 Food for the long haul

With each desperate dispatch from Aleppo; with each revelation about Russian interference in November’s election; with each ethical breach by the Grifter-in-Chief and his progeny; with each horrifying cabinet appointment – the temptation to curl up in a ball grows. Some days, it’s overwhelming.

Activism, I would say. Coming together as a community. Supporting one another. Fighting back. (And, for Syria, checks to Doctors Without Borders, the International Rescue Committee and the UNRWA.)

Here, at the risk of sounding trivial, are other things that help:

Which brings us to Ital Fusion. Located on Nostrand Avenue, close to Brooklyn College (and, more relevant to my own purposes, the Q35 bus), this tiny Rastafarian lunch and breakfast counter (and, in the afternoon, juice bar) serves up vegetarian/pescatarian fare.

My focus has been breakfast. On my first visit, that meant the best bake and salt fish I’ve ever had: tender, not-too-salty salt cod, flaked, mixed with sweet peppers, herbs and onions and sandwiched in a whole wheat “bake.” (For those not familiar with West Indian cuisine, bake is actually fried. This version had just enough of a crust to remind you of that fact, but was not at all greasy.)

After I watched the guy behind the counter ladle out a large styrofoam cup full of a thick, grayish-brown liquid for another customer, I asked what it was. Five-star porridge, he told me. Mixed with peanut porridge. Would I like to try some?

Of course I would.

And so I was presented with a taste – only slightly smaller than the standard portion – and had my proffered payment waved off.

If there is a better thing to eat on the Q35 bus when you’re headed to cold, windswept Floyd Bennett Field to look for red knots and horned larks in the wake of a depressing election, I’d like to hear about it. Because I certainly can’t think of anything. It’s become my standard pre-birding order.

So what exactly is in it? As far as I can tell from looking at Jamaican cooking sites, “five star” is not a standard name – more like a (well-deserved) rating. Ital Fusion’s combines oatmeal, bulgur, arrowroot, sea moss and ripe plantain. It’s nutty and grainy and slightly sweet and delicious on its own, though mixing it with peanut porridge definitely takes it up another notch.

There are plenty of other options – interesting, fresh vegetable combinations (pumpkin, okra and bitter lemon, anyone?), greens, legumes, soy-based meat substitutes in various forms. But I have yet to stray from the porridge.

It’s comfort food for a bleak day, fuel for a long run, sustenance for struggle – from people who know a thing or two about survival and resistance.

(Over the next few months, I’ll be eating my way up and down Nostrand and posting periodic updates. I’ll also be returning to Avenue U.)