Pre-race. Is that red “stop” hand trying to tell us something?

Here’s a great idea. Let’s gather a group of runners at an otherwise deserted playground in Greenpoint, Brooklyn, at 10 pm on a Thursday night and instruct them to run from one of the nation’s most polluted waterways (Newtown Creek) to another of the nation’s most polluted waterways (the Gowanus Canal). Other than starting together and crossing the same finish, there’s no set route for the (roughly) 10K distance. It’s up to each runner to figure it out.

It did to me . . . and to a hundred or so other runners as well. Last night was the fifth running of the “Superfund Super Run,” but my first. One of (many) benefits of not running a fall marathon is the ability to stay up way past your bedtime to pursue marginally irresponsible activities, with a beer chaser.

Even taking the G train to the start was an adventure. I marveled at all the vibrant young people heading for Williamsburg and Greenpoint and Long Island City, at an hour when I’d normally be stretched out on the couch, eating ice cream, gathering cat hair into fluffy wads, and binge-watching Narcos.

Emerging from the train at Greenpoint Av., along with many other people in running shorts and singlets, there was the usual moment of disorientation (where the hell are we? which way is the waterfront?), the usual taking out of phones and frowning over Google maps. I left that to the youngsters, and just followed the crowd. At Greenpoint Playground, I collected my race number (103), pinned it on, mingled with the already large (and growing) contingent of teammates sporting their red-and-white PPTC singlets, and explained (repeatedly) why I was in mufti. It wasn’t for lack of team spirit. I just thought the dayglow green shirt from last year’s Bronx 10-miler would be a teensy bit safer for nighttime racing on an open course.

I had also thought a shirt, rather than a singlet, would be appropriate for a nighttime race in September . . . but as I stood there, already sweating in the still and sultry Greenpoint air, I realized that was not such good thinking.

Incorrigibly competitive, I came gunning for an age group award – especially since the race has a reputation for cool and creative prizes. (A jar of McClure’s Brooklyn-Detroit pickles, anyone?). I was initially mystified, and then a little peeved,  when I learned how the age groups were determined. Instead of defined ages, men and women entrants had been (separately) ordered by date of birth, divided into thirds, and assigned race numbers that corresponded to their third of the age distribution (100s for the oldest women, 400s for the oldest men, etc.). That system solved one problem (the fact that older age groups can be sparsely populated) but, given the lopsided representation of runners in their 20s and 30s, created another. Turns out this tired old lady would be competing against sprightly 38-year-olds.

It also meant that my number immediately identified me as the third-oldest woman in the field. (I’m proud to say that #101 and #102, the first- and second-oldest, were PPTC teammates.)

Letting go of my age group ambitions was, in many ways, a relief. It meant I could just run, and maybe even enjoy myself. Given my record of collapsing in 10K’s in considerably cooler conditions, that was a good thing. Who wants to be an incoherent, crumpled heap on the side of Third Avenue at night (even a highly visible, dayglow green one)?

Ten o’clock came and went. Nothing happened. Finally, someone shouted, “OK, line up, everyone,” and explained the start. It was a pretty basic explanation. “There’ll be two commands. First, I’ll say, ‘Runners, take your mark.’ And then I’ll say ‘Go,’ really loud.”

We were off. To fulfill the “Newtown Creek to Gowanus” superfund theme, we first had to head north and east on Commercial St to Newtown Creek – the only structured part of the race – before looping back to Franklin Av (or, I suppose, whatever other thoroughfare one chose).

Runners were still bunched together closely enough at this point, running mostly in the bike lane, for passersby and bar-goers to realize something was going on, however anarchic it might be. “What race is this?” someone sitting in the outdoor section of a Greenpoint pub called out.

At intersections, we slowed and looked for cars, but did not stop.

Around Huron St., the smell of marijuana was thick in the air.

A few blocks farther: “You can catch those snails up in front of you,” a cyclist shouted, encouragingly .

I was only vaguely aware of passing East River State Park, but when I belatedly realized I was rerunning the route of the Brooklyn Mile down Kent Av., I thought dreamily of how much I enjoyed my 6 minutes, 44 seconds of glory.

Those reveries got me to the Williamsburg Bridge, at which point I started thinking about what a goddamn long-ass haul it is from the bridge to where the bike path curves around the edge of the Navy Yard toward Flushing Av.

Back at the start, I’d lectured others that a nighttime race was no time to get cute and seek short-cuts. Just follow the bike lane, I advised, and there’s no way you can get lost. When you see the Brooklyn Roasting Company on the other side of the street, that’ll be Washington Av., so just cross there.

Naturally, when I got to the messy point where Kent veers left and the bike lane curves right and the BQE looms overhead, I decided to get cute and seek a short-cut. The traffic light was in my favor, and I figured I could cut the tangent by running under the BQE over to the other side . . . except, of course, there was no “other side,” other than the on-ramp. I was forced to proceed up whatever-the-hell street it was that I was on, then stairstep my way up other dark and unknown streets, trusting that I wouldn’t hit a dead end (or get hit dead) before I found Lafayette Av.

Myrtle! Finally, a street I recognized! Who cared if it was torn up for construction, forcing me to detour through various temporary walkways? At least I knew where I was.

Myrtle to Washington to Lafayette: I was slowing down, and even stopped a couple of times to chug water, but I was back on track. All I had to do was continue on Lafayette until it wrapped around BAM and ended at Flatbush, then cross Flatbush to Third Av. This is one of those sections of Brooklyn that always manage to flummox me, no matter how often I walk home from BAM or the Theatre for a New Audience. Aware of this weakness, I’d done a dress rehearsal of that part of the run the morning before. It was so easy! I felt so confident!

Until I got to Lafayette and Fulton at around 10:45 pm last night, hesitated, then veered onto Fulton. Because, you know, everything looks different after dark.

After righting myself – which entailed multiple crossings of busy streets – I got to Third Av and Atlantic just as the timed “Walk” light was ticking off 4-3-2-1. I should have run for it (the woman by me did).

But, instead, I stopped. And waited. And waited some more. As cars whizzed past, one runner after another joined me at the corner. I recognized several people I’d passed earlier in the race, when I sailed by them with an I-hope-not-too-terribly-smug “great job!”

Even though I was just running for the fun of it, this was a bit disheartening.

At least the final stretch down Third Av was short and uneventful. There was a big knot of us running together now, and after the turn onto Carroll, people began to sprint toward the finish.

But where the hell was the finish? How would we know when we were done?

The finish line, it turned out, was chalked across the road on the west side of the Carroll Street bridge. You knew you were done when a volunteer handed you a popsicle stick with your finish place on it. (Mine was 52, in case you’re wondering.) 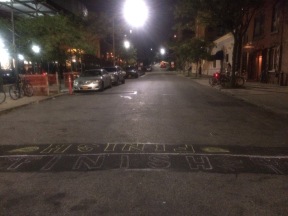 Post-race festivities were inside Lavender Lake, a local bar that takes its name from the milky hue of the Gowanus Canal after a spring rain. I traded my finisher’s drink voucher for a tall glass of Evil Twin Low Life pilsner, and as I stood there, a puddle of sweat forming on the industrial-chic cement floor under me, I decided that beer had never tasted so good.

Many, many thanks to the South Brooklyn Runners for putting this event together. Not only is it a blast, it’s a benefit for the Gowanus Conservancy, which you can read more about (and maybe even make a contribution to) here.

Midnight on the Gowanus

POSTSCRIPT:
Although I didn’t place in my age group, PPTC was well- (maybe even over-) represented in the awards. There were no McClure’s pickles this year, just various items of Strava swag that I wouldn’t have known what to do with anyhow. Most importantly: everyone made it back safely, although one of the best runners on our team did take a couple of wrong turns that turned the 6ish mile distance into 8+.