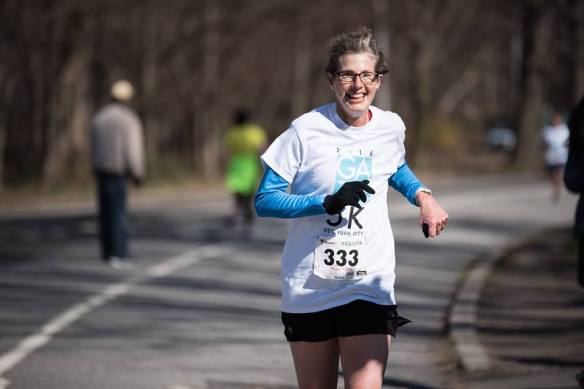 See how happy I am to be running “for the children”! (Photo credit: Monica Jorge)

I don’t normally do “cause” races – not that there’s anything wrong with them, they’re just not my thing. This particular cause, though, is close to my heart. The race benefited UNRWA community mental health programs for the children of Gaza, who’ve witnessed far too much death and destruction in their short lifetimes.

Many years ago, a friendship with a family from Gaza helped open my eyes to a lot of things that I’d never seen or thought about before. I’m grateful for that. Over the years, my involvement in solidarity activities has ebbed and flowed, but I’ve held on to certain artifacts: the scarf Widad gave me, an embroidered pouch (that now holds takeout menus and car service coupons), a ratty old keffiyeh.  And to memories, as well, from breakfast in the Dhabbans’ apartment to hearing Dr. Haidar Abdel-Shafi (something of a personal hero of mine) speak in Ann Arbor.

During the summer of 2014, scenes of rubble and small, broken bodies filled me with a crushing sense of helplessness.

So when a particularly well-targeted Facebook ad popped up on my feed a couple of weeks ago, informing me of a race to benefit kids in Gaza that would be taking place practically in my backyard that coming weekend, it took me about five seconds to sign up.

Several of my Prospect Park Track Club teammates signed up as well. There was a nice little group of us – Aisha and Selina, rocking their red and white PPTC shirts, Murray representing both PPTC and the War Resisters’ League Track Club (yes, there is such a thing, its logo a dove sporting running shoes), me in my official (non-technical) race shirt over a (technical) long-sleeved T that was as close as I could get to United Nations sky blue. And Michael, too, who hadn’t officially signed up before registration closed, but made a generous race day contribution and participated as an unofficial entrant.

We all agreed we weren’t going to really race (even though I told Aisha she could probably win the thing). We were doing it for the children.

That became our refrain, in the way one uses irony to deflect something that’s too big, too serious, too painful to acknowledge head-on. Wearing a heavy, cotton shirt in a 5K? For the children. Hanging around the Grecian Shelter for a full hour and a quarter after the posted starting time (charity events have a different conception of “start” from competitive events, though in fairness, the fact that the 8:30 start time included a “light breakfast” might have clued us in)? For the children. Lining up behind a row of muscular young guys you just knew were going to take off like Olympic sprinters and then slow to a crawl after 400 meters (and who did not disappoint in that regard)? For the children. No mile markers on the course? For the children.

As hopelessly, helplessly competitive as I am, running for the children kept me mellow. I smiled, rather than cursed, when first one big guy, and then another, started walking before we’d even reached Lakeside. I was gracious when someone swerved directly in front of me, out of some mysterious urgency to reach the curb (and only slightly less gracious when he changed his mind and swerved in front of me again two seconds later). I said words of encouragement to runners who were already breathing heavily as we approached Zoo Hill (OK, that was showing off a little) and again when we reached the top.

Aisha’s reaction was a little different. A potent combination of commitment to the children and annoyance at the sprint-and-stop runners who’d lined up in front put wings on her feet. After the first 200 meters, she was a receding speck of red and white far, far ahead of me. After 400 meters, I didn’t see her again until the finish.

Even with my uncharacteristically mellow approach to the race, I couldn’t help but notice, two miles in, that I’d passed an awful lot of other women. I started to set goals – just for fun, since I was running for the children, after all – to pick off others. Not that there were very many to pick off by that point. I set my sights on a woman with long, dark hair who was maybe 100 meters in front of me. I reeled her in, passed her, and then – damn if she didn’t pass me back.

Even though I was running for the children, I couldn’t let that move go unanswered. I passed her again.

She passed me again.

I passed her again, decisively this time. I shifted my focus to the woman in turquoise with whom I’d chatted at the start. I doubted I’d catch her, but it was fun trying.

Was that really the finish up ahead? Time to kick it in –

– except the dark-haired woman (remember her? the one I’d dropped so decisively?) was kicking it in, too. She passed me in a blur of blowing hair and pumping arms and quick, high strides, and by the time I realized what was happening, she was already crossing the finish. I finished five seconds behind her, in 23:44, with Selina next, about 30 seconds back.

Final results: dark-haired woman (who was delightful, by the way) took third, turquoise-woman-from-the-start was second, and Aisha won the damn thing.

For the children, of course.

(Next up: the NYRR Scotland Run 10K in Central Park. I ran it this morning, but will keep you in suspense for a day or two.)