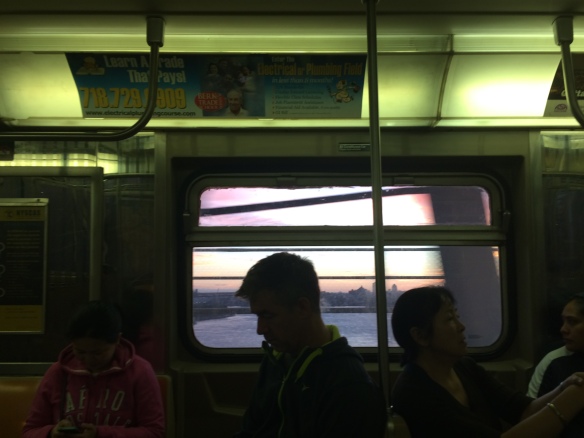 I polished these excuses to a high gloss as I watched the balance of passengers on the train shift from tired service workers heading to or from their jobs to annoyingly perky runners heading to Yankee Stadium. The farther uptown we traveled, the perkier the runners (but of course: they’d had more time to sleep).

Once upon a time, I would have surveyed all those fuel belts and compression socks and warm-up jackets and fancy Garmins and permanently-implanted earbuds and felt smug. Just you wait, youngsters, and I’ll show you how to rock this course old school.

And then I would.

But as I get older and slower, my general peevishness seems to be climbing along with my finishing times. Who were all these people? More importantly: if I closed my eyes, would they just go away?

At Yankee Stadium, the train emptied out and the stairs and escalators to the street filled up with papal visit-level crowds. This did not help my mood. What did help (a little) was seeing actual daylight and (a lot) some of my PPTC teammates.

(I promise that if you are wearing PPTC red and white, you are exempt from my peevishness. Honest.)

After the usual pre-race drill – port-a-john, bag check, warm-up jog – I lined up with PPTC friends (hello, Tiffenn! Hillary, great to see you! hey, Juan!) a few corrals back from my ridiculously exaggerated official starting assignment (my New York Road Runners 10K-equivalent pace is still listed as 7:22, based on my performance in this very race last year). We shared our race plans. Mine was to start out at marathon goal pace (8:40ish) and then work down from there if I felt good.

That had been my plan last year as well – until I clocked a 7:30-something first mile and decided, oh what the hell, let’s see what happens if I try to hold this.

The usual horn, the usual shuffle, the usual dodging and weaving and, still, the usual too-fast first mile. It wasn’t bat-out-of-hell fast – 8:30 – and I felt genuinely relaxed through the next couple of 8:20ish miles as we headed north on the Grand Concourse. I was relaxed enough, in fact, to make a mental note of the former Paradise Theater, now the World Changers Church where Creflo Dollar’s prosperity gospel holds sway.

The first three miles of the course are a straight shot up the Grand Concourse, with a few rolling ups and downs (including an underpass where people with breath to spare, i.e., not me, hooted and hollered to hear the sound ricochet); at Mosholu Parkway, shortly before Mile 4, runners turn and loop around in a complicated way. As a consequence, there are multiple opportunities to see the leaders (who were hitting Mile 7 when I was still at Mile 3-point-something), faster teammates and, eventually, teammates for whom you are a faster teammate. It’s a nice distraction during the toughest part of the race, those miles when you’re starting to tire (I tried to tell myself that I was keeping it nice and relaxed, but myself wasn’t entirely buying it) and the finish is still far away.

Back on the Grand Concourse, the scenery seemed less interesting than it had been on the way out, but the cheers were better. This isn’t a destination race for spectators, but it does draw some very kind neighborhood folks who lied and told me I was looking great.

Street numbers in the Bronx don’t follow the 20-blocks-to-a-mile rule, and I couldn’t remember landmarks (other than the Paradise Theater), so I set mini-goals (make it to that light up there! focus on the green sign!) until, finally and somewhat unexpectedly, the finish was in sight. I summoned up my usual feeble kick, raised my arms for the photographers (yes, I do that shit now), and checked my watch.

My official time of 1:22:10 (8:13 pace) was almost 6 minutes slower than last year. But I ran a controlled, reasonably well-paced race (50-second negative split), and the documentary evidence (via MarathonFoto.com) shows me smiling, clear-eyed, and my normal color at the finish.

Last year, I faded toward the end for a small positive split. It was also one of those races where my finish chute appearance (gray face, unfocused eyes) and demeanor (wobbly legs, general unwillingness to move) resulted in multiple expressions of concern from volunteers. I vaguely recall finding a place on the curb outside the official keep-it-moving zone and sitting there for a long time until I felt as though I could maybe trust my legs.

After this year’s race, I caught up with teammates, posed for group photos, and considered joining a post-run run over the new High Bridge before bailing on that and just doing a cool-down along the course. It was a long, cold train ride home (bad call not to change out of those wet clothes), but the street vendor who works the R train entrance by St. Thomas Aquinas Church had a steaming thermos of arroz con leche at the ready. It wasn’t the greatest, but it was exactly what I needed.

That’s more or less how I feel about the race, too. No excuses necessary.