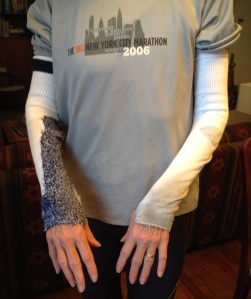 I admit it: I’m a cheapskate. Having coughed up more than $200 in entry and processing fees to run the New York City Marathon, I’m not exactly itching to spend a lot of money on gear.  (Shoes, being essential,* are the exception.) But with the forecast calling for temps in the 40s on Sunday, it’s going to take more than a plastic garbage bag to prevent hypothermia during the long pre-race wait at Fort Wadsworth, and even during the early miles of the race itself.

A little creativity is in order.

Take the attractive and highly functional arm warmers pictured here. They’re fashioned from a wonderful thing called “socks,” widely available for a few bucks a pair from your local dollar store, pharmacy or street fair (or for even less if you take them from your spouse’s sock drawer). A snip here, a snip there, and you’re in business.  I plan to wear these with my race singlet for the first few miles, then throw them to my cheering fans somewhere along Fourth Avenue.

Other race day gear piled in our back bedroom/office in preparation for Sunday:

Come Sunday, I’ll try hard not to look smug when I watch runners in expensive gear debating whether to wear it in the race or stand in the baggage line to check it. I’ll be comfy in my Mom jeans, garish T-shirt and frayed, stained button-down – right up until the last possible moment, when I strip down to emerge as “Running Woman.”

In the meantime, let me suggest another money-saving opportunity for thrifty marathoners and their friends and family – check out those New York Road Runners “Run the City” deals. Sure, most of them are less about saving money than about marketing: I love Jacques Torres as much as anyone, but if I drop $25 on fancy candy, a complementary small hot chocolate seems like the least they can offer me.

There are some gems in there, though, like 2-for-1 doughnuts at Leske’s in Bay Ridge. You won’t find doughnuts glazed with organic passion fruit icing and sprinkled with non-GMO, fair trade cocoa nibs there. You will find airy crullers and overstuffed squares oozing raspberry jelly. I planned today’s easy 5 miler so that it ended at their store, which happens to be practically on the marathon route. I arrived just as a massive shipment of flour was being delivered, and got a peek into their bakery operation in the back. Super nice people, great old school doughnuts and cheap, too (even when they’re not 2-for-1).

Leske’s were making doughnuts, crullers and kringler in the back of their store before “artisanal” was a thing.

4 thoughts on “The thrifty marathoner”