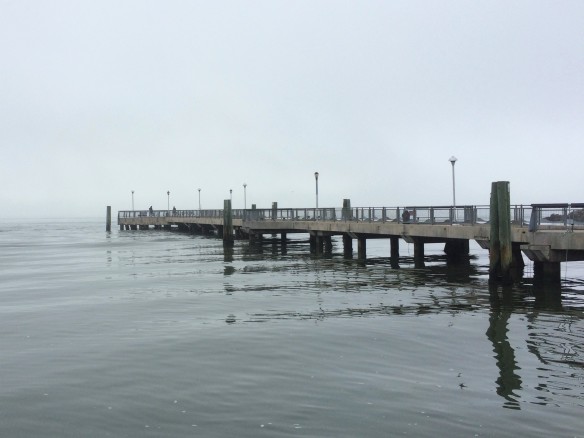 My world, like everyone’s, has shrunk these last two months. I no longer live in a vast metropolis, one in which $2.75 lets me hop on the subway in brownstone Brooklyn and emerge, a little over an hour and one change of trains later, at Pelham Bay in the Bronx, an easy jog from Long Island Sound. There’ve been no trips to Coney Island, or Plumb Beach or Fort Tilden or any of the other favorite places that take me away from the city while being very much of it.

This week, I expanded my “stay at home” radius. While much of Brooklyn and Queens remains inaccessible until I either build up my running mileage or dust off my bike (Citibikes are great, unless you want to go south of 15th St in Brooklyn or anywhere but Long Island City, Astoria and Ridgewood in Queens), merely heading away from the the park and cemetery opens up new possibilities within my current pathetic fitness level.

Like Red Hook. Early Saturday morning I ran past the closed ball fields, did a couple of laps of the track, looped around Ikea, crossed Van Brunt, and braved the uneven Belgian block surface of Coffey Street to the park and pier at its end. Hardly anyone was there. A couple of cyclists were taking pictures from the end of the pier, but left shortly after I trotted up. A father and son chased one another on the grass. A woman walked with her gray French bulldog pressed to her shoulder, the way you would carry a colicky baby.

The minuscule park that includes the pier is named after Louis J. Valentino, Jr., a Brooklyn firefighter who grew up in Red Hook and died in 1996 at the age of 37 while searching for other firefighters thought to be trapped in a burning auto body shop. In the smoke and chaos, there was no way to know the building was in fact empty.

In addition to the pier, the park features a modest memorial to Valentino, whose grave can be found in Green-Wood Cemetery; a bit of grass; and a few flowers, like the ridiculously fragrant lilacs pictured below. 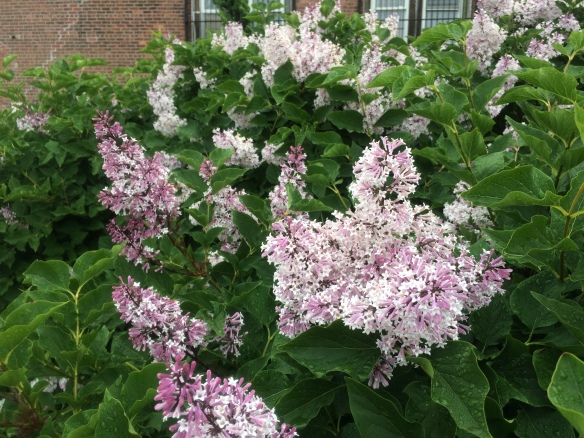 In the late summer and early fall of 2012, the park was home to a strange and beautiful art installation. It consisted of several hundred 1.75″ x 1.75″ laminated photographs or fragments of photographs in shades of blue and gray and sepia, linked together with plastic connectors and stretched between two metal rails to form a shimmering screen. When Superstorm Sandy hit at the end of October, the wind and the surging water of New York harbor tore the screen to pieces.

A few weeks after the storm, I returned to Red Hook and Coffey Street on one of my morning runs. Scattered across what was then a sparse weedy patch at the center of the park, I found the remnants of the installation. The laminated squares were battered and dirty, but still beautiful, and I couldn’t bear the thought of them trampled underfoot and pissed on by dogs and eventually, as the waterfront recovered, swept up and tossed in the trash. And so, not sure if I was doing a good deed or committing petty theft, I collected as many as would fit in the pockets of my running jacket and took them home to clean up. Afterwards I reconnected the squares as best I could, and turned them into a memorial mobile that now hangs in our bedroom.

Having confessed my theft, if it was a theft, I will also put out there that if by some chance the artist stumbles across this post and would like their work back, I’ll gladly return it.

One of the pleasures of going to the park and pier, then and now, is Coffey Street itself. I’ve already mentioned its paving stones – the bane of runners and cyclists, but atmospheric as all get out. The street is lined with narrow brick buildings that once housed longshoremen and warehouse workers and future firefighters and are now occupied by people who drive shiny turquoise and white Mini Coopers with Colorado “Adopt a Shelter Pet” plates. Over the past ten or fifteen years, as the streets west of Van Brunt gentrify, the area has become almost aggressively picturesque.

But I digress. Coffey Street’s main draw remains its pier. Waves crash against the rocks, gulls wheel and shriek overhead. Ferries make their way to and from their destinations – big, stodgy, orange boats for Staten Island, zippy blue and white ones for the Brooklyn Army Terminal and on to Rockaway, or back to DUMBO. Fishermen reel in whatever it is that fishermen reel in. And, of course, there’s the best view of the Statue of Liberty in all of Brooklyn. It’s a head-on view, impressively close in real life, frustratingly distant when you try to capture it in a photograph.

The Coffey Street pier is where I headed on the gray morning (mourning?) after the 2016 election. A running friend had spontaneously done the same – her eyes were as red as mine – and we embraced. It was one of those mornings, much like Saturday, when mist and low clouds obscure the view. But the Statue of Liberty was there then, if barely visible in the photo I took at the time. And it’s still there now.