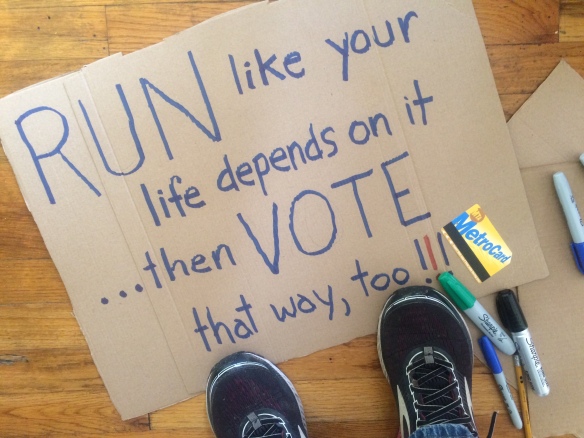 After months of training, I’m ready.

I’ll be back with a full report after the race, but here’s my game plan for tomorrow:

7ish – Head out early to run miles 3-7 backwards, starting at 3rd St in Park Slope and ending at 95th St in Bay Ridge (where I’ll refuel at Rocco’s). Potential additional stop: Panadería Don Paco López.
Depending on time, I’ll either run back or hop on the R train, getting off a stop early to grab a breakfast sandwich at Reyes Grocery.

9:55 – After a quick shower and change, it’s show time! I’ll head back down to the Blue/Green side of Fourth Av, by the Maurice Sendak School (where Marathon Fun Day festivities will be in full swing) to await the elite women. (Go, Desi!)

10:20 – Join other members of the Prospect Park Track Club (aka the world’s finest running club) at Fourth Av and 3rd St to marvel at the elite men, anticipate our first teammates, cheer ourselves hoarse, and ring cowbells until our arms ache.

11:ish – Back to 9th St to catch a G train to Nassau Av in Greenpoint. I’ll position myself on the east (right) side, the better to drop in to the Polka Dot Cafe for a late-morning snack. This is in mile 13 of the race, so depending on the wait for the G train, I reckon that  I’ll be seeing a mix of runners from Waves 1 and 2.

At some point, I’ll check race results on my phone, to see who won (as runners with more than half the race to go continue to stream past).

12:30ish – Back on the G to Court Square, where I’ll try to figure out which exit to use to get to John Brown Smokehouse. If I fail and miss the party there, well, I can still cheer the runners as they head for the big, bad Queensboro Bridge and Manhattan.

??? – Take the E to the 6 to 116th St and Lexington Av, conveniently located midway between miles 19 (on First Av) and 22ish (on Fifth). To get from one to the other, the runners have to cross over into the Bronx and back again, while all I have to do is run up and down 116th. My plan is to go back and forth a few times, catching runners from different waves at different stages of the race (and also sampling some of the abundant Mexican, Dominican and Puerto Rican food options along E. 116th).

When I’m too tired/hoarse/cold/full (but certainly not bored, perish the thought!) to continue, I can head to the official PPTC reunion site, in an elementary school on the Upper West Side, not too far from the finish. We’ll applaud our finishers, drink hot chocolate, swap stories . . . and then a few diehards will jog back to the finish area to cheer the very last runners. (It’s a typically classy initiative by retiring race director Peter Ciaccia, who’s invited local clubs to join him.)