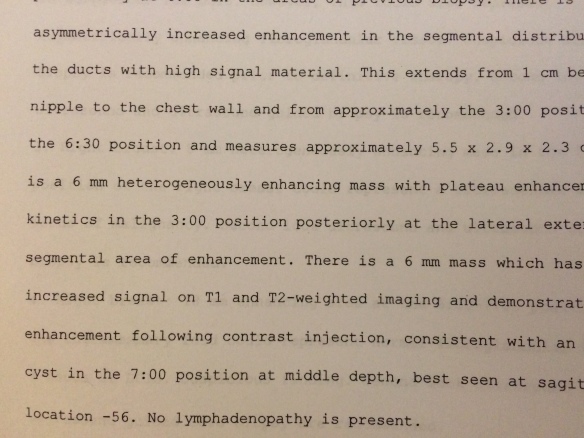 This is a continuation of my walk down cancer’s memory lane. Ten years ago today, I was sitting in a meeting to plan another meeting when my phone vibrated with a call from my breast surgeon’s office.

An observation: trying to follow the discussion in a work meeting when your phone holds an unopened voicemail from your surgeon is a great focusing exercise that I pretty much failed.

I’m not sure where I listened to the message – did I duck into the bathroom? a stairwell? I very much doubt I waited until I was back in my office – and I don’t remember the exact words, only the gist.

Up until that point, I had aced all my cancer tests the way I aced standardized tests as a kid. I had cancer, and it was invasive, but other than that, I was shading in all the right boxes with my trusty #2 pencil. Tiny tumor. Strongly hormone positive. HER2 negative. It was the kind of cancer that, if you have to have cancer, you want to have. The breast MRI I’d endured a few days earlier was part of the protocol for newly-diagnosed patients (a relatively new addition to the protocol at the time), serving as a final checkpoint before the patient was whisked off to surgery.

It could be – probably was – nothing. MRI’s are notorious for false positive results. But it had to be treated as though it was something. And that meant – another biopsy.

Or another two biopsies. As the nurse-coordinator laid things out when I finally reached her, I would first have an ultrasound-guided biopsy of the suspicious areas (there were several of them, not just a whopping 5.5 x 2.9 x 2.3 cm one in my bad left breast, but in the right as well). If the ultrasound biopsy showed more cancer in my left breast, or a previously undetected malignancy in the right breast, then my surgical plans would need to be revised. If the ultrasound biopsy came back clear, I’d need yet another test – an MRI-guided biopsy, this time (“and oh, honey,” the nurse-coordinator said, with unprofessional honesty, “you don’t want one of those”). It was, in other words, a test where only failure had meaning.

I, always an excellent test-taker, struggled to understand that concept.

To further complicate matters, this was a Friday, I was leaving the next day for a week-long vacation in Puerto Rico, and my lumpectomy was scheduled for the Tuesday after I returned. It was quickly unscheduled. When I got back, I’d have the ultra-sound biopsy – the test it was impossible to pass – instead.

Flash forward ten years. My only vaguely medical communication today was a text from my dentist’s office reminding me of the check-up I have scheduled in a couple of weeks. In the morning I ran along the Gowanus and then back into Sunset Park, looked at birds in Green-Wood cemetery (Eastern towhee, species #108 for 2018), got tacos from the bodega on Fourth Avenue for lunch, talked with my daughter on the phone, and did some work on the computer.

An ordinary day, with no bumps in the road.