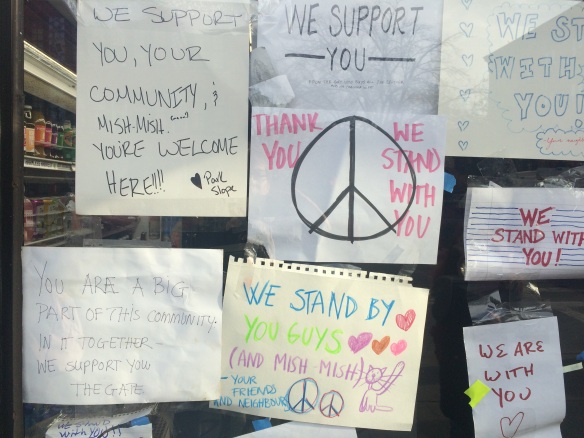 Yesterday, Yemeni bodega owners across New York City went on a half-day strike against the Fake President’s Muslim ban, shuttering their stores at noon. (If you’re not from here, a word of explanation: bodegas are small neighborhood stores that sell groceries, sundries and quick eats, like the bacon-egg-and-cheese sandwiches that fuel city mornings.) You can read about the action – which drew thousands to a demonstration and prayer service outside Brooklyn Borough Hall – here.

This morning, the window of the bodega at the corner of Fifth Avenue and Fifth Street in Park Slope was plastered with messages of support from school kids, other Fifth Avenue businesses and neighborhood residents.

I went in and bought a 4-pack of toilet paper, just because.