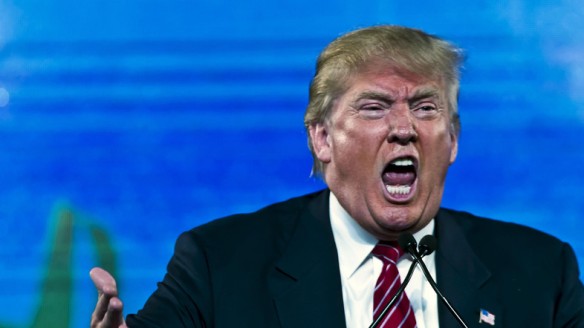 Okay, okay – it isn’t just starting; it’s been going on for a while. A hijab-wearing woman kicked and called “trash” in Bay Ridge. A homeless Latino man beaten up in Boston. Black students ejected from a rally in Valdosta, Georgia. But before last Friday, I hadn’t personally witnessed it.* (Because, when you’re a self-absorbed blogger, nothing is real unless it happens to you, right?)

The other thing that’s different, of course, is that Donald Trump is now the presumptive Republican candidate for president of the United States.

Friday afternoon I caught the B61 bus in Red Hook. (I’d piggybacked some errands on a rainy track workout, and was too loaded down with disintegrating paper bags to run back to Park Slope.) A heavyset white woman in her late 30s or early 40s, hair pulled back in a ponytail, got on at the stop after me and immediately began to complain to the driver. “That other guy is making you do all his work,” she said. “Someone should call the fuckin’ dispatcher and get his ass fired.” A moment of sullen silence to let it sink in. “Three B61s and a B57, empty. While I’m standin’ there in the fuckin’ rain.”

There was some problem with the buses. I’d noticed the other Park Slope-bound B61, too: it mysteriously discharged its passengers at the Downtown Brooklyn stop and then continued on its way without picking anyone else up.

The woman adjusted her hair, pulling it back even tighter and securing it with a scrunchy. “There’s too many goddamn people in this city. That’s why the buses are always so fuckin’ crowded. It’s a disgrace.”

“But whaddawe do? We keep lettin’ ’em in. We gotta shut it off.”

A long pause. She scowled and shook her head and said, in a stage whisper, “Just look at that Mexican back there.”

The older Latina woman across the aisle from me stiffened and set her mouth in a tight line.

The driver tried to return her to the subject of buses. “When I first started driving, up in the Bronx, we had this dispatcher. A Spanish guy. You’d be at a stop and he’d radio you to hold the bus and you’d think, ‘what the hell?’ But it was to keep everything spaced out. He knew his stuff.”

The woman agreed that we needed more like him, and what the hell was wrong with the MTA, they couldn’t manage anything. If they wanted to waste money running empty buses, then let them waste their money, just don’t come crying to us and telling us they need more.

It was clear she wasn’t talking to the driver anymore, but to everyone on the bus, seeking – what, exactly? Affirmation? Any kind of reaction?

“And we’re gonna get that wall, it’s gonna happen. When Trump’s president, we’re gonna start takin’ care of our own, stop lettin’ all these other people in. Kick out all the illegals. He’s gonna do it.”

The woman behind me finished making her restaurant reservations – “three people, yes, for 7 o’clock, thank you” – and exited at Smith Street.

“I can’t wait – President Trump. Build the wall! This city’s gonna get so much better.”

Another handful of people got off at 4th Avenue.

“All these Mexicans, comin’ here. They’re in all the restaurants, and they can’t even cook.”

The bus was approaching 5th Avenue, my stop, and I realized with horror that she was preparing to get off there, too. She was gathering her things, and chanting:

She paused, said something to the driver (I couldn’t hear, but it must have been something like, “C’mon, let me do it”), and the driver, to his discredit, let her speak into his microphone.

That was enough for me. “Don’t hold your breath,” I yelled in her direction. “He’s not gonna be president ’cause we’re gonna kick his ass.”

I don’t know if she heard me. She got out the front door and proceeded up 9th street, I exited at the rear and headed home. I was shaking when I got there – and believe me, it wasn’t just because of my wet running clothes.

*There was one previous incident, but I had discounted it. On the day of the New York primary, I was walking down the street wearing my “Bernie” t-shirt. A man approached from the other direction, talking to himself, and then he was in my face, talking to me. “Why do you like Jews?” he asked me (or did he say: “why don’t you like Jews?” – I wasn’t sure I’d understood him correctly). I kept on walking. “Or maybe you’re a kike yourself,” he yelled after me. He’s crazy, I told myself, ignore him and forget about it. And that’s pretty much what I did, until Friday.