200 bird Thursday is a day late this week, on account of spending far too many hours (a) birding and (b) pondering the point of all those hours. It started in Central Park last Friday. I’d gone there hoping the Swainson’s warbler seen the day before would still be around (it wasn’t). Swainson’s-less, I sought consolation in the Ramble, where a knot of birders converged around a tree that held several yellow-rumps, a blue-winged warbler and a singing white-eyed vireo, while an ovenbird hopped around on the ground below. Cameras clicked and whirred. A man laden with photographic equipment noticed another man with just binoculars. “Excuse me – you don’t take picture? You just look? What’s the point of that? I’m curious what do you get out of it.”

He didn’t ask in a confrontational way, and his slightly fractured English made it that much harder to take offense. The man he’d addressed certainly didn’t seem to take any. He simply explained that he had back problems and could no longer carry his camera with him.

As someone whose back is just fine, thank you, but who never birds with a camera, it got me thinking: what is the point?

What, after all, could be more more pointless than staring up at a tree through binoculars in hopes of catching a glimpse of some small feathered creature? Hardly anything. Nor can I think of many things that are more achingly sincere and utterly irony-free. When the novelist Jonathan Franzen wrote an essay for the New Yorker on his “bird problem” some years back (you can read it here, thanks to Oprah), he described the “creeping sense of shame” he felt as he fell deeper into birding. He took a fair amount of shit for this, including being labeled “the world’s most annoying bird-watcher” by a writer for Slate, but I liked his essay a lot. It made me laugh – and honestly, if you can’t laugh at yourself, then I don’t want to bird with you. It also moved me. And it made me think – when I first read it, over the intervening years, and again last night, when I reread it as I thought about the point of it all. 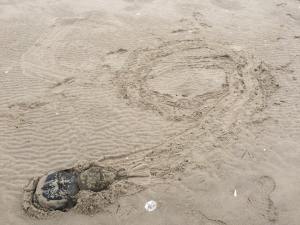 Did someone mention mating horseshoe crabs?

Maybe the point of “just looking” is to slow down, calm yourself, heal from loss (Franzen’s essay is good on this). Maybe it’s to deepen your understanding of the natural world and its web of relationships; in these past four months of obsessive birding, I’ve learned a lot about birds, of course, but also about plants, insects and the mating habits of horseshoe crabs. Maybe it fuels your political commitments, and not just in obvious ways (restoring habitats, fighting climate change, etc.). If you’re already predisposed to care about inequality, the world of birds serves up plenty of metaphors. Birds are poor, as Franzen points out, but many of them live in places coveted by rich people; others favor the same abandoned, marginalized areas as abandoned, marginalized people. Looking for birds can force you to look at capitalism.

I could elaborate on these arguments, but I suspect the more I defend them, the more they will sound like rationalizations. And perhaps they are. Perhaps the pointlessness of birding is the point. Perhaps it’s all about fleeting moments, about adding one more image to the store of hundreds of thousands of images that will eventually fade and, sooner or later, die with you (taking pictures might postpone that end, but, sorry, there’s no escaping it). Between now and the inevitable end, though, those images enrich your life.

A few days after that overheard conversation in Manhattan, I joined a flash mob of other Brooklyn birders to look at a cerulean warbler (my bird of the week) in Prospect Park. Though not (yet) on the Endangered Species list, cerulean warblers are vulnerable to habitat destruction and their numbers, already small, are declining. They are something of a cult bird – people travel distances to see them, employ their song as a telephone ringtone, that sort of thing. And weren’t we just talking about Jonathan Franzen? A cerulean warbler graces the cover of his novel Freedom, and the species plays a role in the book’s plot.

It was a great sighting for Prospect, and so we craned our necks uncomfortably as the bird sang and foraged high in a pin oak. For our pains, we were treated to quick glimpses of a backlit underside, a dark necklace its only clearly discernible feature.

Eventually I moved away from the group, but couldn’t bring myself to leave the area entirely. And so I was standing  a bit farther up the path when the bird – which had briefly explored a tree on the other side of the channel we call the Lullwater – crossed back over and landed at eye level on a branch not 10 yards in front of me.

We had a moment, the bird and I. Its color, previously obscured, was on full display: the rich, subtle, mysterious blue of deep water and morning skies. White underparts and black streaking only serve to emphasize the warbler’s cerulean-ness.

Sean – one of the gurus of Brooklyn birding, who’d come to see the bird (and yes, he came equipped with a camera and arm-long telephoto lens) – was on the other side of a tangle of branches from me. He could see where the bird had landed, but couldn’t see it, at least not clearly. He could see me, though, and knew from my expression (which I can only assume was a rapt gaze, open mouth, stunned smile) what I was seeing. Less than a minute passed – probably much less – and the bird flew away, back up to the treetops. Sean joined me.

“To get a really good look at a cerulean warbler, it’s a gift,” he said.

That’s the point, better than I could articulate it. Looking at birds is opening yourself up to one pointless, ephemeral, surprising, beautiful gift after another.

For those keeping score (that would be me), here’s the updated list:

*Firsts for me in New York
**Life bird