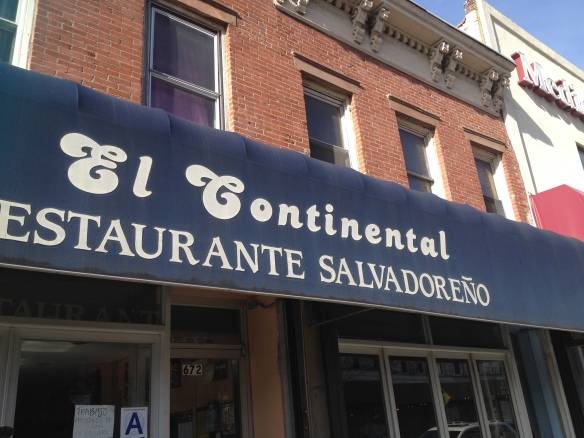 El Continental has long been my go-to place for pupusas. It’s not in Sunset Park, but it’s most definitely on 5th Ave (right at the corner of 20th St), and given the dearth of Salvadoran food in this part of Brooklyn, how could I set out to eat 5th Ave and not eat there? So on a sunny, pre-blizzard Sunday, Eric and I headed out for a stroll and some Salvadoran lunch. 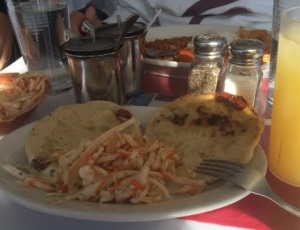 Pupusas, for the uninitiated, resemble thick, tender tortillas, stuffed with various fillings, and then griddled until the masa is lightly charred and the filling finds cracks to ooze out. They’re terrific here, and the curtido – savory Salvadoran coleslaw – that accompanies them makes them even better. When I’m feeling indecisive (which is most of the time), I ask for revueltas, in which three different fillings – cheese, beans and pork – are mixed together. If I had to pick just one filling, though, I’d go with loroco. That’s the name of a flowering vine that’s mixed with cheese to give the pupusas a pleasantly green taste.

Yesterday was a loroco day. Instead of mixing everything up in one dish, Eric and I ordered a variety of dishes – the pupusas, of course, but also beef stew and fried yucca with chicharron (pork in this case, but chicken is also an option). Way too much food, in other words.

The stew was tasty, the thick columns of yucca were like the world’s starchiest French fries (I mean that in a good way, mostly), and the chunks of fried pork were nicely accessorized with pickled onions in a startling shade of red . . . but, I have to say, the pupusas were still the stars.

To wash all this down, I had my usual drink here – marañón juice, made from the same fruit that yields cashew nuts. It’s a cloudy yellow color, not too sweet, and ridiculously refreshing. (There are other juices on offer, as well as Salvadoran horchata – different from the Mexican stuff – and fruit milkshakes.)

The televisions above the bar are generally tuned to sports – yesterday, I was able to watch skiing directly and soccer reflected in the mirror across the room. It’s a pleasant place to hang out, especially with blizzard warnings in the forecast. I sighed when it was time to leave our sunny window spot and head back outside. And now, with snow blowing everywhere, yesterday’s snapshot of the Corona/milkshake sign inviting me to find my beach is positively poignant. 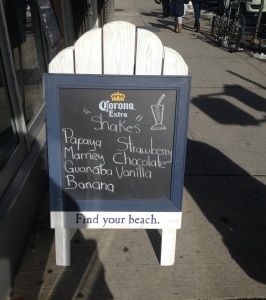