With this post, I’m starting a new project for 2020. The plan is to highlight 50 overlooked or off-the-beaten path places that I happen to like. It’s part of a general refocusing of this blog on travel, both within Brooklyn and New York City and farther afield. (If you follow this blog for running, birds or food, don’t worry – those things are a big part of how and why I travel, and will continue to feature prominently. And if you are unaccountably fond of my long-form pieces, I plan to continue dropping in a few of those from time to time as well.)

I should make clear from the outset that there’s no rank order to the “50 favorites” list. In fact, at the moment, there is no list. I’ll write about places as I revisit them, discover them, or generally get around to them.

I’ve long known, because it’s part of general Brooklyn lore, that the Smith-9th station is the highest in the entire New York City subway system. (It’s official name is “Smith-9 Streets” . . . using “9” rather than “9th” is an MTA style thing, which no one actually says, just as no one says “Streets.”) I recently overheard a man on the F train telling the woman with him that it was the highest subway station in the whole world. At the time, I dismissed him as a blowhard – but it turns out he was correct, at least according to the MTA. The station stands 87.5 feet above the ground, roughly the height of a 6-story building. 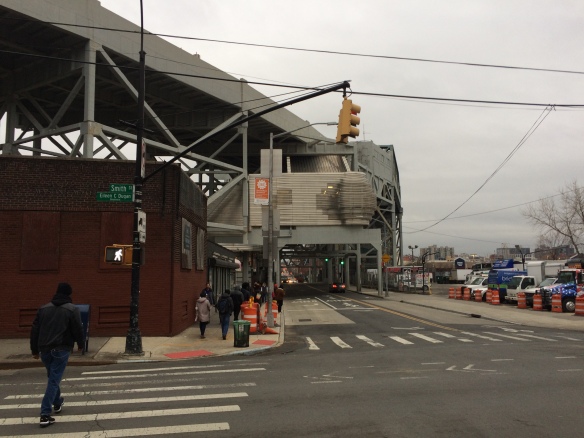 My first memories of the station are of a forbidding structure shrouded in scaffold netting to prevent loose concrete and metal debris from killing pedestrians. Its six-year refurbishment took longer and cost more than planned, and did not include the addition of an elevator to make it handicap accessible. (Not even the escalators go all the way to the platform.) But it did include cool, place-specific art. While they’re no substitute for an elevator, I love the way the windows are etched with historic maps of the surrounding area: you can look through what once was, and see what is. The exterior isn’t quite as shiny as it was when the station reopened in 2013, but it’s still pretty shiny, with a vaguely mid-century feel. And the towering support structures continue to inspire awe.

Here are some things you can see from the Smith-9 platform, or from the F or G train as they pass through it:
* One World Trade Center
* The Woolworth Building
* The Empire State Building
* The Statue of Liberty
* The Verrazzano Bridge
* The Gowanus Canal
* The famous “R” in the former E.J. Trum sign in Red Hook (which you can read about here)

Here are some other things you can see:
* A scrap metal yard
* The Lowe’s parking lot
* Fuel oil storage tanks
* Traffic on the Brooklyn-Queens Expressway
* On Saturday mornings, the line to buy new releases of beer at Other Half

And here are some things you can no longer see:
* The Eagle Clothes sign that used to mark my street
* The much-loved Kentile Floors sign (which I last wrote about here)
* The Twin Towers

You could say that the Smith-9 Streets station is a kind of window onto the city: its glittering tourist landmarks, its work-a-day neighborhoods, its dysfunctionality, its creativity, its gains, its losses. Someone who wanted to understand this place could do worse than to spend a bit of time there between trains.