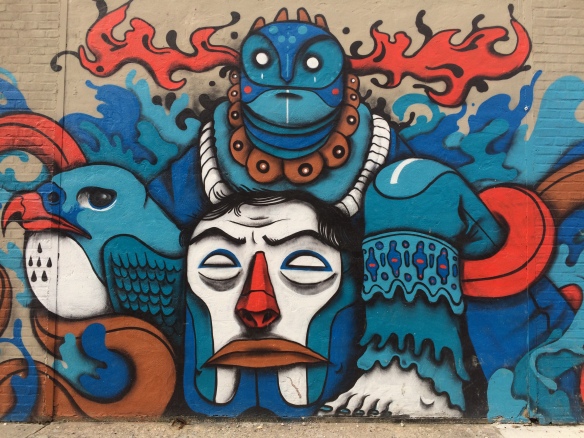 Today’s bonus post launches a new blog feature, highlighting especially cool and/or weird street art seen around Brooklyn. It’s quick and easy enough to post weekly, even when I’m at my laziest, which is often. It gives my backlog of “seen on the run” photos a raison d’etre. And, hopefully, it will brighten your own Sunday.

In honor of our Mexico trip, this week’s installment features “Templo Mixcoac,” seen yesterday morning at the corner of Norman and Guernsey in Greenpoint and credited (I think – deciphering tags is not my forte) to @tiburon_704, who appears to be on Instagram (also not my forte).

Mixcoac, I learned when I got home, is an outlying neighborhood of Mexico City that contains some of the oldest colonial-era churches in the city. It’s also where invading U.S. forces set up their headquarters in 1846-1848. The name may be a portmanteau of the Náhuatl “mixtli” (cloud) and “coatl” (serpent), Mixcoatl being the god of the hunt.  Fun fact: in the contemporary iconography of the Mexico City metro system, the Mixcoac stop is represented by a stylized, loopy snake.

A second piece (below), from a heavily Latinx section of Sunset Park, doesn’t reference Mexico specifically, but still struck me as very Mexican in its use of art for political education. In this instance, the purpose is to inform community members of their rights in encounters with the police. 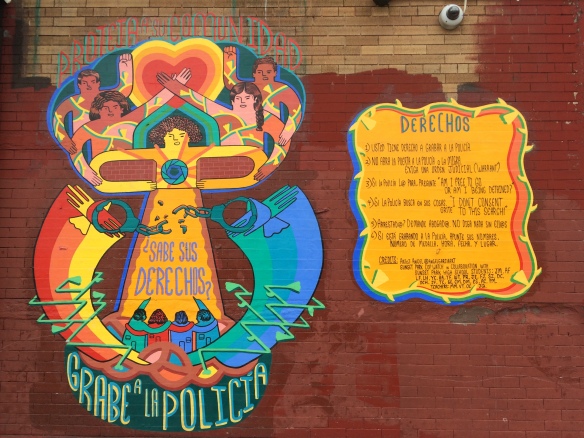 “Do you know your rights? Protect your community/Tape the police”

More to come next week. In the meantime,  enjoy tonight’s big television event – by which I of course mean the finale of True Detective.