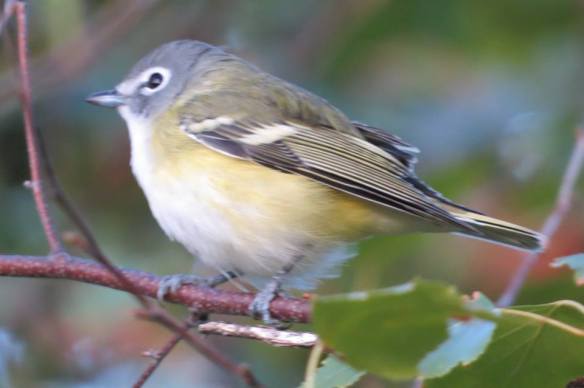 What color is this bird’s head? (Photo credit: Gus Keri)

A slow week, punctuated by conversations with other birders about wind and weather – when would the winds blow from the south, or better yet, the southwest, nudging reluctant migrants our way?

I’d targeted a few birds for my list: brown thrasher, blue-headed vireo, and at least one new warbler. With luck (and southwest winds), I thought I had a shot at reaching 150.

But the migrants never really came, and an unusually heavy schedule of meetings and political commitments cut into my birding time. (I can report that unlike in Portland, no birds landed on Bernie Sanders’ podium during his rally in Prospect Park.) I did get my brown thrasher, singing raucously on Prospect Park’s Lookout Hill. I got a couple of new warblers. And I got my bird of the week, the blue-headed vireo.

Which brings us to the issue of misnamed birds. This is something my daughter feels particularly strongly about (one of the few things relating to birds she feels strongly about, I should add). The red-bellied woodpecker is a source of outrage for her, since its most obvious feature is brilliant red, not on its belly, but the back of its head. That, and the black and white ladder striping on its back. But “red-headed woodpecker” and “ladder-backed woodpecker” were both taken, and some birds, seen up close, do have a faint wash of pink on their lower bellies. So that name is semi-justifiable. As for the purple sandpiper, even in the right light, you have to squint awfully hard to see a purple sheen on its charcoal plumage. But friends of mine swear they see it, so perhaps I just lack subtlety.

The head of the blue-headed vireo, though, is most definitely not blue. It’s slate gray, with white spectacles. My daughter’s outrage aside, it’s a lovely bird. They can be hard to spot – vireos are tree-top birds, dangling from branches as they forage – so I always feel lucky when I get a good look at one.