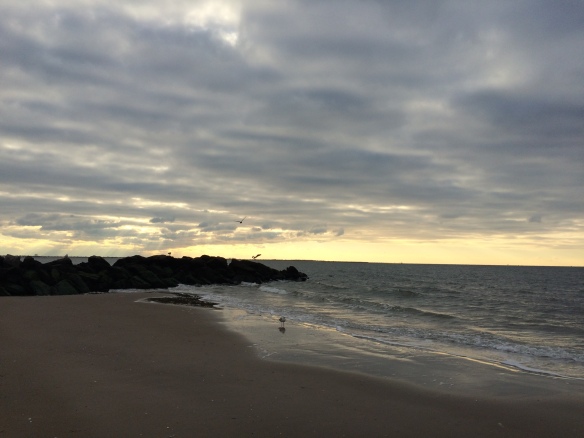 Somewhere out there, there are long-tailed ducks.

Here is what I put on yesterday morning for my excursion to Brighton, Manhattan and Plumb Beaches (aka the Brooklyn Riviera):

I felt slightly overdressed as I lurched toward the train station – until I turned the corner and the wind slapped me in the face, forcing me to wonder if I couldn’t perhaps have managed a few more layers.

So excited was I about this, my first official Brooklyn Bird Club field trip, that I overcompensated and got to the Brighton Beach stop on the Q train half an hour early. The commercial strip along Brighton Beach Avenue was not exactly hopping at 7:30 on the Saturday morning after New Year’s, but I eventually found an open coffee shop, run by Russians but offering French pastries, Italian coffee and a restroom where a hand-lettered sign reminded men to “!!!!Please!!!! Raise the toilet seat when you make piss. The management.”

Our little group met up by the ticket window on the east end of the station. There were eight of us, all of us toting binoculars (aka “bins”), two of us also toting monocular telescopes (aka “scopes”).

Following our leader, we headed past some fine art deco buildings toward the windy beach.

It was, predictably, deserted. We could study gulls – because you never know what rarities might be mixed in with the usual suspects – to our hearts’ content, without attracting puzzled looks from passersby. (No rarities were seen, alas, just ring-billed, herring and great black-backed.)

Suddenly, one of our group called out, “Loon!” Viewed through binoculars, it presented as an elongated speck of black and white approximately halfway between the beach and the horizon. I was skeptical at first – “I dunno, are you sure it’s a loon? I think maybe it’s a merganser” – but the ID was soon confirmed. Our leader tried to get it in the scope to determine if it was “common” or “red-throated,” but the bird’s insistence on diving every 30 seconds and resurfacing just outside the scope’s field of vision made that a little challenging. “It’s a common,” another group member declared, decisively. “See how heavy the bill is?”

I didn’t, to be honest, but I trusted her.

We would eventually see both varieties of loon – I saw more loons yesterday than in my previous 54 years combined – and I continued to mix them up with mergansers. (Though I do believe I got somewhat better as the day went on.)

On we walked, to Manhattan Beach. This involved backtracking to the main drag and then continuing on residential streets (“did you get that mockingbird?” . . . “nope, they’re all house sparrows”) before cutting back down to the shore.

Manhattan Beach yielded a number of interesting black specks: some were bufflehead, some were common goldeneye (the beginners among us received a tutorial on how to distinguish your average, work-a-day goldeneye from a rare Barrow’s goldeneye), some were mergansers and/or loons (both types) and some were (drum roll) long-tailed ducks.

The last was a new bird for me, and according to its advance press, it’s a beauty. The male’s winter plumage is mostly white, with a brown cheek, a black cummerbund and a long, elegant black tail (hence the name). Happy as I was to get a “life” bird, I was a little disappointed that all I could see was a black-and-white flying blur that disappeared into the chop as soon as it landed.

We backtracked again, then headed for Sheepshead Bay (mute swans, Canada geese, cormorants and mallards), and eventually, Plumb Beach. I expected the grasses and mudflats to be teeming with birds, but they were oddly quiet. We did see more loons (and mergansers), and – be still, my heart – a pair of long-tailed ducks close enough to actually discern their markings.

They looked exactly like the picture in my field guide (probably because my mind filled in the blanks), and they were lovely.

Not everyone was as excited about the long-tailed ducks as I, and after four hours and at least that many miles, some in our little group were beginning to tire. Two women opted to catch the bus on Emmons Avenue instead of walking back. The rest of us looked for a place to get some lunch – and since the El Greco diner is no more (it’s being replaced by luxury apartments, naturally), we settled for another classic Sheepshead Bay eatery.

I think it was called “Applebee’s,” or something like that.

Our group lost another couple of members after lunch, and so there were just four of us on the reverse hike back to Brighton Beach and on to Coney Island. I was fading, too. A few purple sandpipers skittering around on the jetties failed to revive me (purple? according to our leader, they have a “purple sheen,” but I’ve never seen it), and while a glimpse of a northern gannet in the far distance piqued my interest, I had become aware of just how much my hiking boots weighed down my feet, how much my upper legs and lower back ached , and how deeply chilled I was beneath all my layers.

So I passed on the walk out to the fishing pier (and from there, knowing how indefatigable our trip leader was, very possibly on to Coney Island Creek). I headed to the Stillwell Avenue station instead, as did the other woman who’d stuck it out with me. We wished our leader and his young colleague good luck. They were the last birders standing.

Our final tally wasn’t that big (just 25 species, by my count) but it included some good sightings: loons, goldeneye, long-tailed ducks . . . and three guys out for an ocean swim.

It was reassuring to know we weren’t the craziest people on the beach.

1 thought on “A walk on the beach”