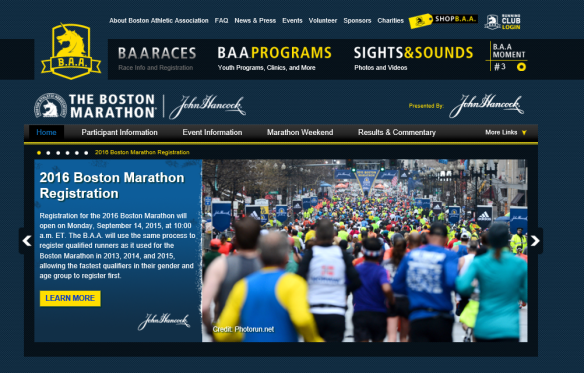 Once upon a time, I didn’t care about running the Boston Marathon.

I had my reasons. There was my New York chauvinism (even back then, when I lived in Detroit): the New York City Marathon is just a better race, I declared, before I’d run either one. There was my desire to seem quirky and iconoclastic, gleefully puncturing the assumption that I had run, or at least aspired to run, Boston (“Boston? Nah, for some reason I’ve never been interested. What I really want to run is the Around the Bay 30K in Hamilton, Ontario. Did you know that race is actually older than Boston?”). There was my aversion to training hard through the Michigan winter. And, I’m ashamed to admit, there was snobbery. Weren’t those vaunted Boston qualifying standards a little, well, soft?

In my not-so-youthful arrogance, with two Boston-qualifying races to my name, I figured that if I ever changed my mind, I could always shuffle my way to another BQ. The standards just get easier with age, after all, and I had plenty of time.

Then came my cancer year. I had my fateful mammogram on New Year’s Eve, 2007; was diagnosed in January 2008; had surgery in March; started chemo at the end of April; had my last chemo in August; and started plotting my running comeback in September.

Needless to say (why else would I be writing this post?), my comeback plans involved the Boston Marathon. The race I’d once scorned was now a race I wanted desperately to run. I fantasized about the crowd at the starting line in Hopkinton. I pictured myself cruising along Route 135 – not dreary at all, as I’d mistakenly imagined, but rather the scene of intense athletic focus as I, strong and fit, nodded encouragingly to the other strong and fit runners I was passing – and through the wall of sound that is Wellesley and up and down the Newton hills and finally I’d catch sight of the big Citgo sign and then I’d be on Boylston Street and look! – there’s the finish just ahead.

I mapped out a plan. In the spring of 2009 (just within the qualifying window for an automatic, time-based entry to that fall’s New York City Marathon), I would run a decently-fast half marathon. Not blazingly fast, mind you – I was being realistic  – but a smart, conservative race, well-executed. Running New York again would be a thrill in itself, and my finish time there (after another smart, conservative, well-executed race) would get me into Boston in the spring of 2010.

That’s not what happened. Somewhere in mile 10 of my April half marathon (where I was right on pace for a 1:40 finish, thank you, despite the odd, bruised sensation in my left heel that had been plaguing me for several weeks), I felt something pop in the bottom of my foot. The popping was followed by excruciating pain, as I made the acquaintance of my plantar fascia.

I finished the race in a golf cart and was on crutches for the better part of a week.

So, no time qualifier for the New York City Marathon for me. But there was always the lottery. And when I wasn’t picked in the lottery, there was always fundraising for a charity. I signed up for Fred’s Team. (With my cancer history, raising money for the Memorial Sloan Kettering Cancer Center was pretty easy, and felt good.)

My training was another story. The torn plantar fascia sidelined me for a month, followed by another month of short, easy runs on grass and dirt. By August I had worked my way back to double-digit long runs and 45+ miles a week – worked my way back a bit too quickly, as it turns out. Come September, I was injured again (extensor tendonitis this time). I ran fewer than 45 miles the entire month.

Any rational person would have thrown in the towel at that point, but I was not a rational person. No longer limping – but drastically undertrained – I trudged to the lower level of the Verrazano bridge the first Sunday in November knowing that a BQ was not going to happen. Perhaps because there was absolutely no pressure, I had a blast through the first 16 miles. (I dropped out, cheerfully, at 19.)

For a few years after that, I reveled in a new approach to running: no goals! no plan! no pressure! I finally made it to Hamilton for the Around the Bay 30K, which I jogged. I did the Race for the Cure. I even won a small cross country race (there were only 3 women entered, one of whom dropped out). Mostly, though, I just ran for the love of it. My race spreadsheet has no entries between May 2010 and July 2012.

But Boston was still calling. And in 2013, I started to chase that Boston Athletic Association unicorn again. My plan was essentially the same as it had been in 2009. Run a half marathon time qualifier for the 2014 New York City Marathon. Train sensibly for New York, shooting for a conservative goal that would qualify me for Boston with a bit of a cushion (thanks to my advancing age, my Boston qualifying time was now an easy-peasy 4 hours). Execute my race plan. Finish triumphant. Run Boston in 2015.

This time, the pieces fell into place. I got my half marathon qualifier (1:46:05 at Staten Island in October 2013). I trained through the summer and stayed injury-free. My fitness improved; I ran Staten Island again in October 2014, this time in 1:43:59. A 3:45-3:50 marathon finish seemed entirely doable.

So I’m trying again. I’m signed up for this year’s New York City Marathon (having considered, and rejected, the possibility of chasing a BQ elsewhere: that race and I have some unfinished business) and will be gunning for a time south of 3:55.

Declaring that goal publicly makes me a little uneasy – a race goal is such a private thing, something to whisper into your pillow late at night while insisting (deceitfully) that all you really care about is running your best and finishing strong.

Am I jinxing myself? Silly superstition. Am I risking embarrassment? Embarrassing myself is what this blog is all about. And so, from now until November 1, I’ll be posting periodic training updates, whining a little (or a lot), and generally documenting my quest for redemption and a place in the 2016 Boston marathon. (NOTE: A helpful reader just walked me through the Boston qualifying window. Registration opens in mid-September, and closes a few weeks later, as the race is filled. That means my November marathon will miss the window for 2016, but will put me in contention for 2017.  And it gets better . . . since I will have moved up an age group by then, my qualifying time will be 4:10.)